Cassava Technologies is on a mission to use technology as an enabler of social mobility and economic prosperity, transforming the lives of individuals and businesses across the African continent. It is comprised of unique, interconnected business lines which together create Africa’s leading technology company of continental scale.

EMPOWERING INDIVIDUALS AND BUSINESSES ACROSS AFRICA

We’ve built the internet infrastructure that underpins Africa’s digital economy and are now poised to deliver the next generation of digital solutions. We are empowering individuals and businesses in Africa through digital solutions to drive the vision: a digitally connected future that leaves no African behind.

We are developing and are deploying Africa’s largest Wi-Fi network designed to bring the internet to 100m Africans for the first time at affordable prices by 2025.
We are the home of Africa’s first truly global Super App, Sasai, which offers financial services including simple, secure and reliable payments, cross border payments, micro insurance, and mobile wallets. 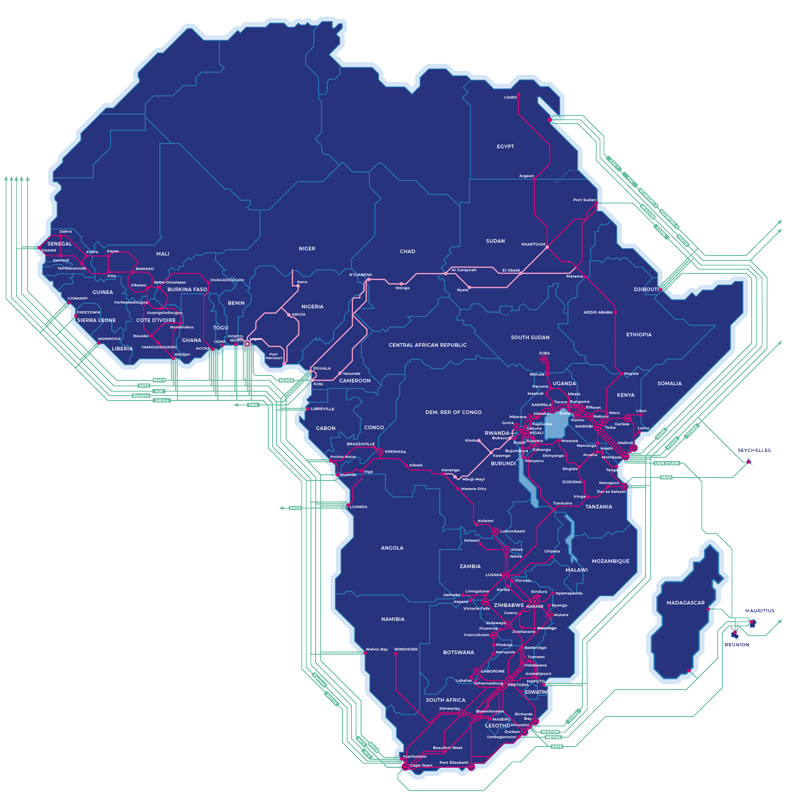 We own and operate Africa’s largest cross-border fibre optic network which delivers reliable connectivity and digital solutions across the continent.

We own and operate Africa’s largest cross border fibre optic network which delivers reliable connectivity and digital solutions across the continent.

We are developing and are deploying Africa’s largest Wi-Fi network designed to bring the internet to 100m Africans for the first time at affordable prices by 2025.
We are the home of Africa’s first truly global Super App, Sasai, which offers financial services including simple, secure and reliable payments, cross border payments, micro insurance, and mobile wallets.

Value of transactions processed on Fintech Platforms in 2020

Orphans and children given scholarships

Strive Masiyiwa is the Founder and Executive Chairman of Cassava Technologies which is built from the strong performance and track record of Econet, one of the pioneers of the mobile telecoms industry in Africa. Strive Masiyiwa set out more than 20 years ago to bring connectivity to Africa. He went on to build Africa’s largest independent fibre network, totaling more than 100,000 kilometers. The business has now grown to an entire ecosystem of digital solutions designed to bring technology to the people and businesses who need it.
Originally from Zimbabwe, Masiyiwa left the country in 2000, and is based in London. Masiyiwa serves on several international boards including Unilever Plc, Netflix, National Geographic Society, and the Global Advisory boards of Bank of America, the Council on Foreign Relations (in the US), Stanford University, the Bloomberg New Economy Forum, and the Prince of Wales Trust for Africa. Masiyiwa is the only African member of the US Holocaust Memorial Museum’s Committee on Conscience.
In May 2020 Masiyiwa was appointed to serve as an African Union Special Envoy to help coordinate Africa’s private sector efforts to procure medical supplies and fight the spread of COVID-19. As Special Envoy he also heads up the Africa Vaccine Acquisition Task Team. He led a similar private-sector initiative to fight Ebola in West Africa in 2014-2015.
Masiyiwa served on the African Union Reform Task Force led by President Kagame that led to the breakthrough of the African Continental Free Trade Area and the creation of the SMART Africa digital transformation initiative. Together with Melinda Gates and Hon Sri Mulyani, Minister of Finance of Indonesia, he served as co-chair of the Pathways for Prosperity Commission for Technology and Inclusive Development, headquartered at Oxford University
A board member of the Rockefeller Foundation for 15 years as one of its long-serving members, Masiyiwa is a co-founder, with Kofi Annan, The Rockefeller Foundation, and the Bill and Melinda Gates Foundation, of an initiative to help 400m African smallholder farmers known as the Alliance for a Green Revolution in Africa. He then became its second chairman after Kofi Annan, and since stepping down, has continued to serve as Chairman Emeritus. He was honored for this work with the Norman Borlaug World Food Prize Medallion.
Masiyiwa was a co-founder with Richard Branson of the Carbon War Room and the B-Team. He is a founding member of the Global Business Coalition on Education. He previously chaired the Micronutrient Initiative of Canada. He served on the UN Global Commission for Adaptation focusing on climate change challenges, and on the jury of the Hilton Humanitarian Prize. At the invitation of the United Nations Secretary-General, Masiyiwa has served on two UN Commissions: Financing Global Education Opportunities and Sustainable Energy for All.
As a philanthropist, Masiyiwa is a member of the Giving Pledge. In 1996 he and his wife Tsitsi, co-founded what is now known as the Higherlife Foundation which has supported the education of over 250,000 orphaned, vulnerable, and gifted children across Africa, as well as health, disaster relief, and preparedness, and rural transformation programs in conjunction with Delta Philanthropies.
Since 2013 Masiyiwa has devoted his time to mentoring the next generation of African entrepreneurs through his Facebook page, which has a growing followership of 5.8+ million young people. For several years, Facebook identified his platform as having the most engaged following of any business leader in the world. Other awards and recognition include:

An honorary fellow of the African Academy of Sciences, Masiyiwa has received honorary doctorates from Morehouse College, Yale University, Nelson Mandela University and the University of Cardiff where he received his BSc in electrical engineering in 1984.

We are Faithful Stewards

We seek to use technology as an enabler of economic prosperity and work to provide digital solutions for individuals and businesses in Africa that are inclusive and enable them to realize their economic potential.

Leveraging our Pan African digital broadband network, interconnected data centres, solar renewable energy, global partnerships and the passion of our teams, our digital solutions are empowering individuals and businesses across the continent.

Through Cassava Technologies, we have brought together our complementary business lines under one experienced and founder-led management team, with proven execution capabilities and deep knowledge and experience of the African business landscape. This allows us to deliver on our mission, satisfy our customers and engender trust within the communities in which we operate.

Hardy Pemhiwa is a seasoned board-level practitioner with extensive senior management experience across Eastern and Southern Africa in financial services, development banking, telecommunications, media and infrastructure.
Pemhiwa was Group Chief Executive and Managing Director of Econet, one of the pioneers of the mobile telecoms industry in Africa, [for six years].
He has over 12 years’ experience as a managing director and co-founder of a regulated financial services firm in Kenya offering investment management and investment banking services across Eastern and Southern Africa. In this role, he helped companies in the region to raise more than $500m in debt and equity capital.
Pemhiwa spent nine years as a senior executive at PTA Bank, of which five years were as an Executive Director and member of the Executive Committee. His responsibilities included overseeing the bank’s project finance portfolio across 18 countries in Eastern and Southern Africa, managing relationships with clients and governments and raising capital for the bank’s lending programs from local and global sources.
Pemhiwa holds a B. Eng. from Queen Mary College (University of London) and an MBA Certificate in Finance from the Edinburgh Business School. He is fluent in English, and speaks French, Shona and Swahili.

Pan-African Presence with 30MW IT Capacity by End of 2021, Powered by Renewable Energy

Pan-African Presence with 30MW IT Capacity by End of 2021, Powered by Renewable Energy

Oswald is an international digital technology professional and business executive with more than 14 years’ experience successfully advancing the growth and adoption of digital technology across the African continent. Oswald has worked with start-ups, universities, global technology and venture capital companies to develop and scale up innovative digital solution across Africa. Oswald working with the African Union, Africa CDC and other strategic partners recently led the Econet technical team in developing the Africa Medical Supplies Platform which is the marketplace for Covid-19 medical supplies for Africa governments and businesses.

Norman has a well-rounded experience gained whilst working in various African countries like Nigeria, Zimbabwe, Zambia, Tanzania and South Africa. Having begun his career journey at Standard Chartered Bank, he moved into the telecommunications industry when GSM technology was introduced in Africa by being part of Econet Wireless Zimbabwe team. Thereafter he moved to Celtel International as Commercial Director in Zambia before landing the job of Chief Marketing Officer in Nigeria. In 2011 Norman was nominated to the prestigious GTB global top 40 world telecom leaders under 40 years as a result of his work in Nigeria. In addition, his exploits in IOT have recently earned him two Titans of Influence awards (2017) on a national and regional level in the information and communication technology (ICT) sector.

Nic Rudnick became Liquid Telecom CEO in 2004, when the company rebranded from Econet Satellite Services, and has played a lead role in the creation of our Pan-African network, which now stretches over 60,000km. He has been listed in Global Telecom Business Magazine’s 100 most influential people in the telecommunications industry for the last five consecutive years – highlighting his dedication to building Africa’s digital future.

Hardy Pemhiwa has over 12 years’ experience as a managing director and co-founder of a regulated financial services firm in Kenya offering investment management and investment banking services across Eastern and Southern Africa. In this role, he has helped companies in the region to raise more than $500m in debt and equity capital.

Darlington Mandivenga has served the Econet Group in various senior executive roles in a stable career spanning over almost 20 years, including as CEO and CMO within its Telco Operations. His most recent role before the current one was that of Group Deputy CEO for Econet Wireless Operations which had oversight on all the Group’s mobile network operations . He has tremendous pan African experience across the major markets of influence that include Nigeria, Kenya, Zimbabwe and South Africa, among others.